Gay Ver Steeg’s parents purchased the 400-acre Buckeye Ranch, located in Tulare County near Sequoia National Monument, in the 1960s. Several years later, in the early 1970s, they built a home on the ranch and moved up from Los Angeles to spend their retirement years there. Not too long after this, Gay’s mother became ill and Gay and her husband, Jim, moved to the ranch to help take care of her. Expecting to stay just a few years, they are now approaching their 30th anniversary at Buckeye Ranch. 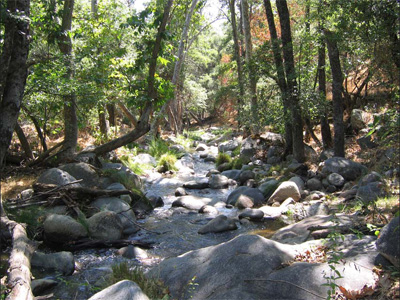 Why did they stay so long? “We found it delightful,” Jim Ver Steeg replied. It’s easy to see why. Buckeye Ranch lies in a stately blue oak woodland. Tyler Creek, a tributary of Deer Creek, runs through the property; beautiful sycamore trees grace its banks. The ranch covers an extensive wildlife area that is home to bobcats, bears, deer, mountain lions, and numerous Sierran birds. An old stagecoach road winds its way through the property and one can find grinding rocks used by Native Americans, maintaining the memory of California’s early history.

The decision to put 360 acres in a conservation easement came naturally. “We were fortunate to own a piece of ground that we and others deemed worth conserving. We realized that we could do this and decided that we should.” The Nature Conservancy was instrumental in getting the process going and the Sequoia Riverlands Trust (SRT) did the rest.

Speaking of working with SRT, the Ver Steegs commented, “We could not have done this without them. We all had the same goal in mind, but there were a lot of details to think through and put in writing.” While creating the conservation easement was time consuming, the Ver Steegs see great value in having completed the process. They lease the rangeland to their neighbor, who grazes about 80 head of cattle on the property for a limited time each year. A priority of the Ver Steegs was that the land would continue to be used for grazing.

“We ended up with an agreement that actually resulted in improving our grazing practices,” Jim Ver Steeg commented. Another one of the outcomes is a planned project to fence off Tyler Creek from the cattle. With the first conservation easement in the area, the Ver Steegs—stressing the importance of protecting water quality—hope that others will follow and can benefit from using their agreement as a model.

In closing, Jim Ver Steeg read a quote from Aldo Leopold’s A Sand County Almanac: “We abuse land because we regard it as a commodity belonging to us. When we see land as a community to which we belong, we may begin to use it with love and respect.”