When Jim Greil’s parents bought their farm in Washoe Valley, Nevada, in the 1930s they were the only residents on the eastern side of the valley. The area was first settled in the mid-1800s when miners flocked to California. Instead of gold, however, this area was rich with silver. As the mines closed down at the end of the century, the land was vacated. Greil’s father—a career navel officer, pilot, and photographer—enjoyed farming and raised a variety of crops on the property including hay, onions, and potatoes. 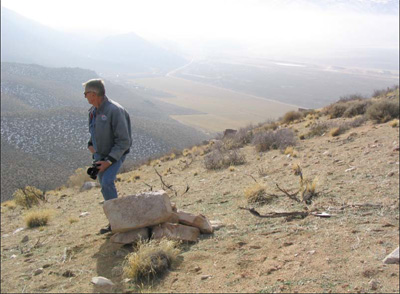 Standing next to a trail marker, Jim Greil surveys his farm.

While there may have been expectations of his becoming an aeronautical engineer like his father, Greil proudly states “I had farming in me from the beginning.” His fondest childhood memories are of working the farm alongside his father. Greil left the farm to attend college and graduate school, and ended up teaching agriculture at Cal Poly, San Luis Obispo.

When he retired in the mid-1990s, Greil returned to the family farm and continues to work the land today. Greil is no stranger to the rigors of farming and the challenges of making a living off the land. He notes that land is “many farmers’ retirement” and that he, too, could gain financially by selling his property. In fact, he has had his share of lucrative offers. However, nothing is further from his mind. “I’m not going to leave. It is a very special place. I love the open space, the diversity of plants and animals, and working the land.”

The land supports a variety of wildlife: waterfowl are plentiful in the two ponds in the wetland zone, while hawks, owls, deer, mountain lions, and bobcats roam the upland zone. As he looks out his porch at the two dozen deer having lunch in his garden, Greil comments on an important feature of the property: it connects to other significant open areas, allowing wildlife—to whom state and other arbitrary boundaries are irrelevant—to move freely along natural migratory pathways.

Soon after he returned to the farm, Greil began the process of putting 114 acres in a conservation easement. He contacted the Nevada Land Conservancy (NVLC), which was just getting up and running at the time. As is often the case with this type of land transaction, the process was not swift since NVLC first had to find funding for the purchase. Eventually funds were secured through the Nevada State Question 1 Bond fund and the Natural Resource Conservation Service (USDA) as part of the 2001 Farm Bill’s Farmland Protection program. With this, Greil’s goal of “saving a piece of open space” was met. He praises NVLC’s efforts. “They were fantastic to work with; they did an outstanding job.”

In retrospect, the time it took to complete the process is insignificant compared with the result: the land will remain a special place, protected for perpetuity.