Like many other landowners in the Sierra-Cascade region, Gary Hendrix traces his family’s roots in the area back to the Gold Rush days. His great-grandfather homesteaded in Shasta County. But instead of mining, Isaac Phillips’ livelihood came from blacksmithing, a trade his grandfather brought with him when he immigrated to the U.S. from Scotland during George Washington’s second term. One day, Phillips took his son, who later would become Hendrix’s grandfather, to visit a local sawmill. The young boy was fascinated with the operation. From this day on, he was destined to become a mill owner. And so began the journey that would lead to the Phillips Brothers Mill. 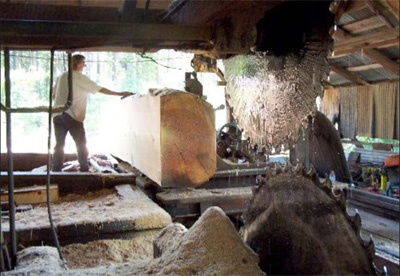 In the early 1930s, Hendrix’s uncles, pursuing their father’s trade, purchased a 560-acre parcel of forested property next to the land the family had homesteaded during the late 1800s. This brought the family’s total property in Oak Run (east of Redding) to 920 acres. At the time of the purchase, the forest was not in good condition: timber production was at a very low volume. Under his uncles’ sound forest management practices, timber production increased 1,000 percent. As Hendrix stated, “They took an incredible amount of pride in the forest and had very close ties to the land; they considered the trees their friends.”

Hendrix shares this bond. “When I decide which trees need to go, it’s not a cold-hearted decision. I talk to them. I thank them for providing for my family all these years.” Today the forest is healthy and vibrant, with trees ranging from seedlings to ones more than 500 years old. In 2005, the Phillips family received the American Forest Foundation’s (AFF’s) Outstanding California Tree Farmer of the Year award and in 2006 was a finalist for AFF’s Western Regional Tree Farmer of the Year award. The Phillips Brothers Mill continues to contribute to the local economy, producing lumber and beautiful wooden boxes that are purchased for wine and specialty foods. As a result of the family’s careful preservation of the sawmill and more than 100 historical machines, the mill, established in 1897, is listed in the National Register of Historic Places.

Seven family members now share ownership of the property. Speaking of their decision to put a conservation easement on the property, Hendrix explains, “The land has provided a home for six generations of our family. We, in turn, want to take care of the land.” The family worked with the Pacific Forest Trust (PFT) to set up the easement. Describing the process, Hendrix says, “It went well; we’re very pleased. We told them what we wanted to do. They didn’t tell the family what to do.” Referring to PFT’s annual monitoring of the property, he adds, “They do a good job. They come and inspect it each year. I know that we would be held accountable if we weren’t in compliance.”

Hendrix offers the following advice for landowners who are curious about conservation easements: “We’ll all be gone soon. Ask yourself what mark you want to leave behind. It’s not locking up the land. It’s about preserving our heritage and sharing it with others.”

—For more information and photos, visit the Phillips Brothers Mill.