In this case a road, not just a river, runs through it—in this story of generations-long twists and turns that eventually led to good fortune for a family, and the greater good for a landscape. 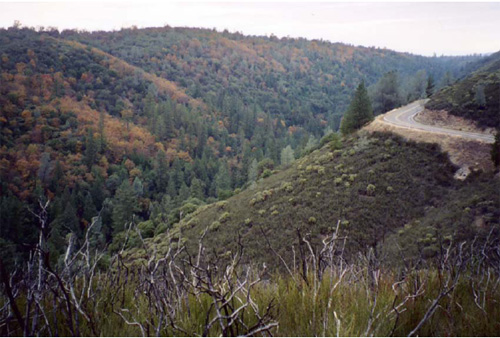 Late in the 1800s, Martin Heatlie’s grandfather, Clifton Wildman, had moved to California in the pursuit of gold and settled in Placerville. As jobs in mining were slow, Heatlie’s grandfather ran for and was elected to the office of county surveyor. His major project in this role was working on Highway 193, just north of Placerville. In the following decades, all of Wildman’s children left the area and the family’s connection to the land seemed to have come to an end. But serendipity intervened.

Heatlie, who was born and raised in the San Francisco Bay Area, recalls, “It was around 1967. I was driving through Placerville and stopped at the side of Highway 193 to take a walk through a real nice stretch of open land. I heard the sound of running water and came upon a beautiful waterfall and knew at once that this was a very special place.” So special, in fact, that he made a point of bringing his wife to see the area, located along the South Fork of the American River in El Dorado County.

Not long after, Heatlie overheard a colleague at work describing a piece of property he owned and wanted to sell. Heatlie immediately recognized this as the place he had stumbled upon on during his hike. At this time, Heatlie’s mother and aunt were looking to move out of the Bay Area to a warmer climate. This was the perfect opportunity. Together with his mother, aunt, and cousins, Heatlie purchased the 233-acre parcel in 1969. During this process, the family discovered the connection between Highway 193 and Heatlie’s grandfather, and named the property Wildman Hill.

The land looks the same today as it did when Heatlie’s grandparents settled in Placerville. Chaparral, manzanita, and several species of trees—including pine, oak, and fir—are plentiful. Deer, bears, wild pigs and turkeys, and a variety of bird species make their home there. Land-locked steelhead salmon (rainbow trout) from Folsom Lake spawn in the quarter-mile stretch of the American River that runs through the property.

After his mother and aunt passed on, Heatlie and the surviving owners decided to sell the property to the American River Conservancy, which is transferring it to the Bureau of Land Management. Describing this decision, Heatlie said that, although the sale was at “a much lower price than we could have sold it for, I am thrilled to have done this. I know my mother, aunt, and grandfather would be pleased.” Through this selfless act, the property will remain true to its name: wild and replete with expansive views of the open country for all to enjoy. A river, a road—and a legacy of care—will always run through it.